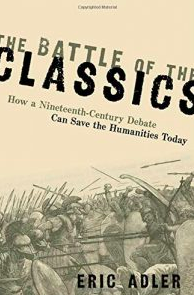 What the Humanities Battle Is For

By Jessica Hooten WilsonApril 13, 2021No Comments

We’ve become accustomed to the “battle” language with regards to the liberal arts and the humanities in higher education. What if we pause for a moment to consider who is fighting whom and who are the casualties of this war? When we draw out the battle lines, we find that no one is declaring outrightly the worthlessness of the humanities. From the perspective of one side of the fight, the humanities merely have failed the cost-value assessment. Parents do not want to spend thousands for their children to study disciplines that do not correlate with a specific job in the marketplace. Engineering, medicine or nursing, and education seem to train students for specific positions in the economy; thus, parents can foresee the return on their investment. Within the academy, administrators are motivated to satisfy parents in order to recruit more students and secure their tuition revenue. Faculty within vocational programs do not want to lose their credit hours to disciplines that appear useless to their degree plan. Facing all of these assumptions about the humanities, faculty within the disciplines struggle to validate their work.

Classicist Eric Adler gazes backwards a few hundred years before these current wars over the humanities for ways we might save these disciplines in the future. He begins his Battle of the Classics: How a Nineteenth-Century Debate Can Save the Humanities Today on his home turf, recalling a local fight, in which an economics professor took on the claims of the French department that studying languages increased one’s intelligence. His colleague justified the inclusion of language requirements in the core curriculum with a smattering of social science data. “This exchange left me deeply disconcerted,” Adler writes. “Why had one of my fellow humanists chosen to justify the value of his life’s work on the basis of a handful of studies conducted by social scientists?” Adler fears the attempt to validate one’s discipline from outside of the discipline is a losing strategy. Instead, we must look within our fields for the reason why they matter.

For Adler, the key to saving the humanities is to argue for the necessity of their content in cultivating good human beings. If we only prove the competencies that students will acquire by studying Latin and Greek, philosophy, literature, and the like, then we secede ground to other disciplines that can likewise prove their potential to improve students’ critical and creative thinking abilities. Rather we must hold to our purpose to pass down the best that has been thought and said, knowing that the instruction by these wise texts and the engagement with enduring questions will transform the character of students. Somewhere between the ancient Greek tutors and the modern American academy (and Adler seeks to show us how in his brief overview of this history), we lost the notion that humanities are ultimately meant to humanize us.

Those who wage war against Adler’s book attempt to suggest his arguments are racist, conservative (love it when that adjective can be used as an insult simpliciter), and fetishizing of the products (great texts). Joel Christensen, a classicist at Brandeis University, accuses Adler of drifting rightward in his arguments, missing the goods of progressivism, relativism, and postmodernism, by receding to Irving Babbitt’s “New Humanism” as our way forward. Such a route, in Christensen’s estimation, ignores the “women, people of different disabilities, different faiths, different genders, sexualities, races, etc.” Yet, if you look at the actual example course outlines that Adler proposes in light of Babbitt’s legacy, these lists are fully representative. For instance, Adler suggests a course on the problem of mortality that would consider selections from the Egyptian Book of the Dead, Shakespeare’s Hamlet, Dostoevsky’s Crime and Punishment, Virginia Woolf’s To the Lighthouse, and Gabriel García Márquez’s One Hundred Years of Solitude. Adler has no intention to be exclusive. Only he would prefer we not feign inclusion, opt for tokenism, or suggest that any text will do. In our attempts to be anti-elitist, we’ve thrown out the good, true, and beautiful for the relevant, useful, and inclusive.

Others contend that the humanities may still be taught, but they should figure outside of the university where the cost may be mitigated. In part, I agree. I founded a K–7 classical school in my small town, and we are adding a grade a year as we grow. However, where will I send those students to college? When students fall in love with literature, philosophy, and history, where will I send them to graduate school? How will they pay back student debt if we have relegated all teaching of the humanities to relatively free options online, at library book clubs, church groups, or primary and secondary schools? Without scholars trained in these fields, the continuation of humanities is impossible. Our version of humanities will be anemic. Yes, we need a culture where lawyers and pastors read Solzhenitsyn in their spare time, but surely, we need scholars of these great works to teach us, to move us towards deeper understanding of these works, to illuminate their humanizing influence.

Adler’s manifesto may be summed up in three claims. First, competencies should not replace content in our apologies for humanities. In other words, we cannot teach Thelma and Louise in place of Simone de Beauvoir. Engagement with the specific content will cultivate the human being, not merely training competencies with any material. Something is lost when our society spends more time watching Marvel films than they do reading Homer. Second, “humanists should advertise the fact that eschewing character development in favor of strict vocationalism is a danger to society.” If colleges become only vocational training grounds, we will create a society of wealthy worker bees living in despair. They will think they are participating in democracy, but they will be controlled by the forces of consumerism, propaganda, and indoctrination. Instead of free human beings, we will be turning out cogs for the machine. And, third, “humanists should fight for an educational law of measure. American higher education requires both humanitarianism and humanism.” More than those two goods, we also need something much greater—piety, and charity and the transcendent goods that rely on revelation and grace.

It’s difficult to convince people who have not experienced the effects of Virgil, Dante, and Austen that such transformations do occur. In his discussion of the way that Latin and Greek were taught in the nineteenth century, Adler notes that poor pedagogy cleared the way for opponents to denounce their import in education. Similarly, if most parents, administrators, and faculty were taught literature in excerpts from an anthology and assessed by multiple choice quizzes, current humanities faculty face a hurdle explaining how life-changing great books can be. For humanities to have champions in and out of the university, professors must practice life-changing teaching. Rather than focus on breadth of content and checked boxes of familiarity with titles and authors, professors need to pass on a passion for the best that has been thought and said. Love should be the driving force in the classroom: love for texts, love for ideas, love for the students who will then embody wisdom.

From my vantage point, we’re standing on quicksand to argue that great books will make people good. While great books do not make someone good, they can make us better. If we begin with a search for goodness and look within the great stories, poems, belles lettres of the past, we will not be disappointed. These works bolster our resources for being good people. When the culture of quick-fix, flashy headlines, egoism, and autonomy attacks a person, these works remind us that we are souls. The best books encourage activism and contemplation, justice and mercy, creation care and reverence. Because the human condition is fallen, we are often lost in our despair. Should we face suffering and confusion alone with the limited faculty of our sinful nature? Or, might we expand our arsenal in our fight against the terrorism towards the human spirit by reciting the proud speeches of Sojourner Truth, the lovely verses of Gerard Manley Hopkins, the organized clarity of Thomas Aquinas? If we forego the cultivation of these goods in our academies, we will lose their purchase in the culture, and eventually, we will forget who and even what we are.

The battle is not over who is right. In this war for the saving of the humanities in higher education, we are not fighting for our survival. Who cares who gets to teach the most classes? The battle is over the nature of a human being and what education should look like in a flourishing culture. To lose this battle is to become less than who we could be. But to win? We just might save our humanity.

Read “What the Humanities Battle is For” by Jessica Hooten Wilson on the The Kirk Center here.