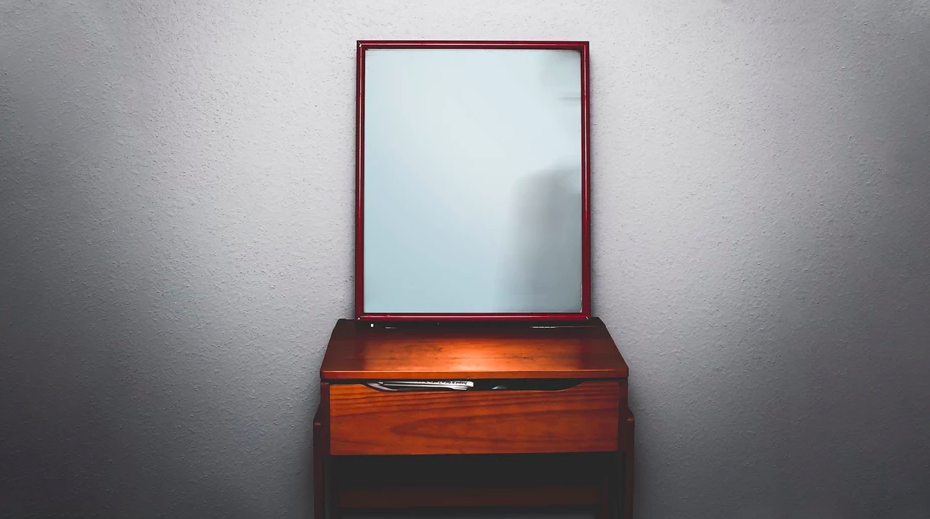 The Devil Lives in the Mirror

I stood before the dazed librarian as she scanned each questionable title: The Death of Satan, I See Satan Fall Like Lighting, By Authors Possessed, the books about demons piling up before her. I remember my discomfort and lame apologies about what appeared to be a sinful attraction to evil. This was a Christian university library, after all, and I had a stack of demonic literature rising to evil proportions at the checkout counter.

A similar discomfort confronts me now when I sign the author’s page of my book Giving the Devil His Due—its cover depicting a half-naked demon donning a red cape. Or when a radio personality invites me on his show in the hopes that I will denounce America’s absorption with that “demonic” holiday Halloween. Extended family members often confess their demonic encounters to me, trying to convince me that The Screwtape Letters is no mere caricature but the accurate epistolary adventures of an ancient monster.

Most discomfiting of all, I have stood before an audience of nonbelievers numbering in the hundreds and begged, “Please, for the love of all that is holy, do not listen to any little voice inside you; it may be the devil’s.” I can hear everyone thinking, What’s a nice girl like you doing reading and writing books like this? Instead of comfort, I have chosen to prize truth, in imitation of the two writers I admire most—Fyodor Dostoevsky and Flannery O’Connor. Both of them give the devil his due in order to save us from losing our souls.

The demonic has been a literary trope for centuries—think Milton’s Satan in Paradise Lost, Mephistopheles from Faust, or somewhat recently I, Lucifer. So, when I began writing a book about Dostoevsky and O’Connor, I was not discovering something new by pointing to the devils in their work. No one who reads their stories will miss the demonic overlays. Rather, as I wrote about the two novelists, I began learning the identity or whereabouts of the demonic. Unlike Frank Peretti—whose demons lurk in shadows and wage war from outside of us—Dostoevsky and O’Connor depict the devil within us. O’Connor defines the novelist’s job as reflecting “our broken condition, and through it, the face of the devil we are possessed by.” If you read her stories, you will be shown a mirror that reflects a scandalous image—yourself as possessed.

Her stories, like Dostoevsky’s, describe the demonic as parasitic evil that detracts from our being, gaining energy and power by our complicity. For example, in her novel The Violent Bear It Away, the main character is a 14-year-old boy named Francis Marion Tarwater who rejects his destiny as a prophet of God. When he does, a stranger’s voice begins whispering within his mind. At first the voice irritates him, soon it sounds the same as his voice, then he sees the stranger’s eyes, and finally, the devil assaults him. Likewise, in Dostoevsky’s The Brothers Karamazov, readers witness Ivan Karamazov dialoguing with a devil in his apartment. Apparently, this is the little demon’s third visit. Over time, the devil has gained power in Ivan’s life.

The question should tug at us: How does this happen? How do we wittingly or unwittingly court evil until it claims authority over us?

The devil’s greatest wile is to convince us that he does not exist. When Tarwater’s demon first addresses the boy, he lies by saying, “[T]here ain’t no such thing as a devil. I can tell you that from my own self-experience. I know that for a fact. It ain’t Jesus or the devil. It’s Jesus or you.” In other words, the choice between Jesus and “you” is the one decision that we all have to make on a regular basis. But here’s what the devil doesn’t explain: The choice to follow one’s self actually enslaves a person to demonic whim.

I found similar truths while reading The Brothers Karamazov. The characters who succumbed to pride—and thus to the influence of the demonic—lived according to false narratives about their identity. One calls himself a buffoon. Another poses as an intellectual. Yet another is torn between being a romantic hero or a sensualist. The holy figure in the novel, Father Zosima, cautions these characters: “Above all, do not lie to yourself. A man who lies to himself and listens to his own lie comes to a point where he does not discern any truth.”

When we believe that we are our own, we conform to a falsehood given to us by the “father of lies” (John 8:44). The more we believe in ourselves, the less capacity we have for discerning truth. As Paul reminds us, “You are not your own, but have been bought at a price.”

Now as ever, the devil’s lies hide as truth— in common mottos of our culture that sound appealing, inspiring, and desirable. We want to be in charge of ourselves, in control of our future, and able to make ourselves better. That sounds nice and good. But when “you do you,” as the saying goes, you become the supreme self. “If pushed too far, the quest for a ‘Supreme Self’ can blur into the most ancient human temptation,” writes Ross Douthat in Bad Religion, “the whisper in Eden that ‘ye shall be as gods.”

For believers, this struggle between good and evil, between God and Satan, comes down to our view of authority. We Protestants often cringe at this word in part because we recall abuses of power and authoritarian overreach. However, the word should also evoke the one who authored us into being. If we reject all authority in order to “think for ourselves” and “be our own guide” in the world, Dostoevsky and O’Connor (and I alongside them) suggest that we will unwittingly fall prey to demonic authority. But God is the ultimate authority.

When I wrote about “giving the devil his due,” I didn’t mean the horned figure with his bright hot poker. Rather, I wanted to partner with Dostoevsky and O’Connor to remind readers of the real devil, whose contagion of lies and violence draws on every human heart. This devil plagues each one of us. Through our media culture, in particular, he lies sweetly and constantly. Every children’s film seems to depict a hero staring at his or her image in a mirror or a pool of water and discovering that the secret to life is to believe in oneself or to trust oneself.

But “the heart is deceitful above all things,” Jeremiah warns us in Scripture (Jer. 17:9). The devil must be unmasked so that we can each see ourselves for who we are—as souls in need of a savior.

Read “The Devil Lives in the Mirror” by Jessica Hooten Wilson on the Christianity Today here.