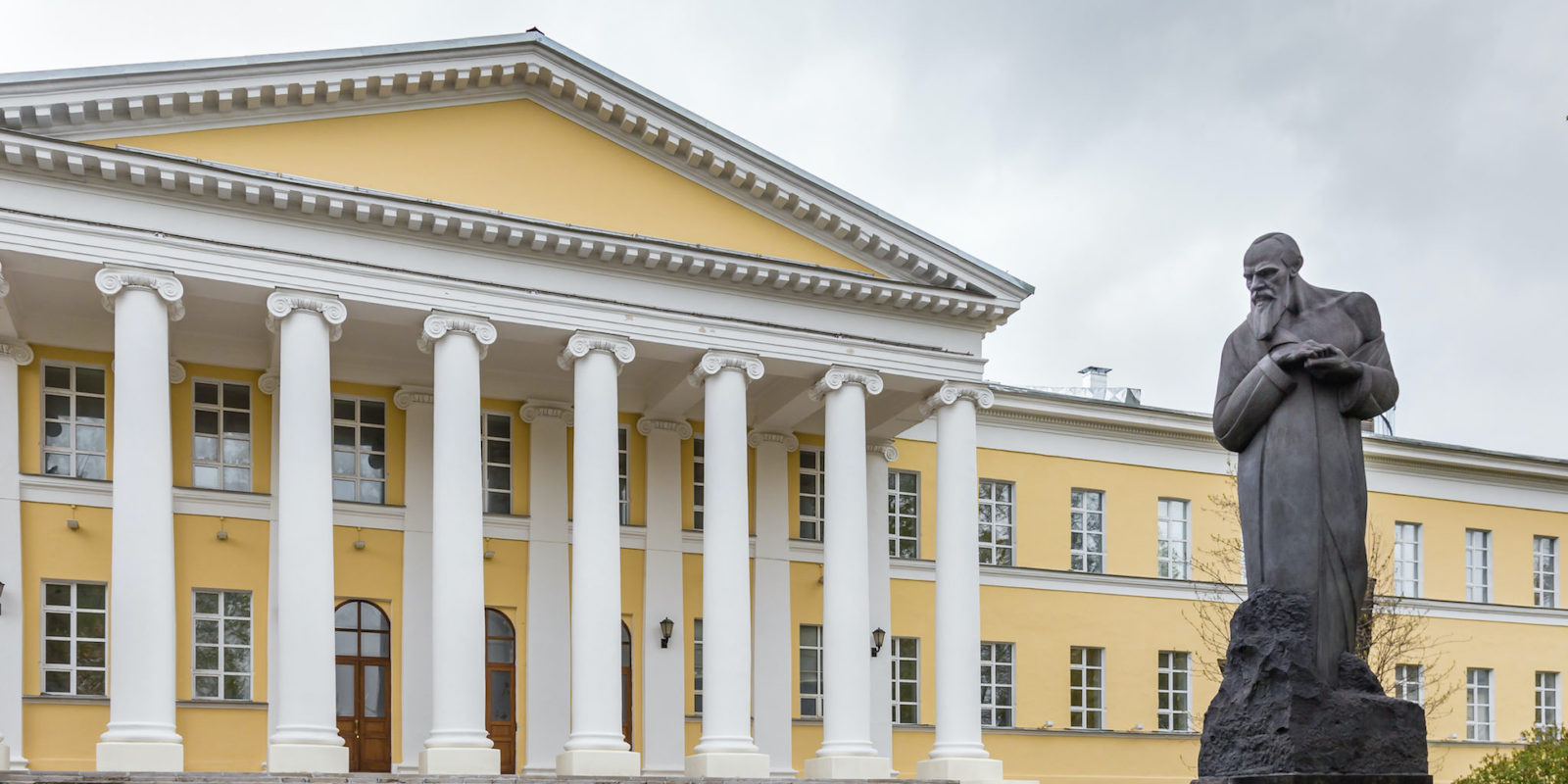 Fyodor Dostoevsky was arrested, led to a platform, tied to a stake, and blindfolded before a firing squad. As his biographer Joseph Frank describes the scene: “A cart with coffins could be seen on the side, and a priest came carrying a cross, which they all kissed; some made confessions. The order was given for the rifles to be raised, and this was done; but then the drums of the regiment surrounding the square began to beat retreat.” Dostoevsky was an ex-army officer, so he understood the meaning of this. One can imagine the way he would have slid against the pole, weeping and deflated, realizing he had been spared his execution. For Dostoevsky, this moment provided a turning point in his life. Whereas he had previously been part of a revolutionary group intent on reconstructing a socialist utopia, this experience disabused him of these fantasies. His nonchalance regarding whether Christ was of one or two natures transformed into a vehement devotion to Christ’s divinity. And, after his seven years of prison in Siberia, he understood how false were his earlier caricatures of Russian peasants. In Lectures on Dostoevsky, Frank walks through this transformation, beginning with Dostoevsky’s biography, moving through each of his novels, not merely the most famous five that followed his conversion, and thus, readers witness how his brush with death transformed his work from realistic fables to stories resonant with, in Frank’s words, “eschatological apprehension.”

For scholars of Dostoevsky, Frank’s five-volume biography is indispensable. But many of us were thankful when those 2500 pages were condensed into a more approachable one-volume abridgment Dostoevsky: A Writer in His Time (2009). Now, we have his lectures from his annual course at Stanford University, a book we can recommend to students and Dostoevsky aficionados without a lengthy apology that the work is not pretentious and the insistence not to fear its imposing size. Lectures on Dostoevsky lets readers sit in on Frank’s course; we can imagine him in his Crime and Punishment baseball cap regaling us on Dostoevsky with his characteristic modesty and humility. As critic Robin Feuer Miller writes of Frank in the Foreword, “[Frank] wears his immense knowledge lightly; he renders the complex into the seemingly simple; he does not insert himself into the work but chooses instead to offer steady support to the student or the reader.” Frank is the kind of teacher we all want when we read Dostoevsky—someone to make sense not merely of passages but of the whole, someone who does not provide a Frank-ean reading but tries to set before us Dostoevsky as Dostoevsky himself desired to be read.

This does not mean that Frank, as Miller asserts, renders “Dostoevsky’s works accessible to his students so that each may individually find a path toward creating their own Dostoevsky.” Just as Frank does not try to create his version of the author, he’d find the idea of each student having their own Dostoevsky to be hogwash. In the appendices, readers will find David Foster Wallace’s essay “Joseph Frank’s Dostoevsky,” an essay which Frank called his favorite. The title seems to strike against what I am arguing here—that Frank did create a version of the author. Yet, the title is parodying Frank’s critics who create their versions of authors, uplifting Frank for bucking this trend and instead creating “an accurate and exhaustive context” within which to read Dostoevsky. Wallace writes, “These readings aim to be explicative rather than argumentative or theory-driven; their aim is to show as clearly as possible what Dostoevsky himself wanted the books to mean.” I’d recommend readers of Frank’s lectures begin with Wallace’s essay.

Wallace asks a question that sounds dated but should be asked again in 2020: “why Dostoevsky’s novels ought to be important to readers in 1996 America.” From a literary scholar’s perspective, no writer has had more influence on American literature than Dostoevsky. From a cultural perspective, who better to show us how to grapple with ideological totalitarianism than the prophet who foresaw it and buttressed those dissidents like Aleksandr Solzhenitsyn into standing against it? Wallace adds his own answer to Dostoevsky’s relevance:

For me, the really striking, inspiring thing about Dostoevsky isn’t just that he was a genius; he was also brave. He never stopped worrying his literary reputation, but he also never stopped promulgating the unfashionable stuff in which he believed. And he did this not by ignoring… the unfriendly cultural circumstances in which he was writing, but by confronting them, engaging them, specifically and by name.

Dostoevsky is not merely a literary titan of the past, but he should be a living presence. He can only have such vitality if we continue to read and know his works, and Frank’s new posthumous collection empowers us well to remember Dostoevsky.

These lectures are not mere teasers by which we dally in studying Dostoevsky; despite their brevity, they provide a framework for considering holistically Dostoevsky’s life and complete oeuvre. Frank does not whitewash Dostoevsky’s burgeoning talent from its imperfections but allows readers to see his development—from where he fails in Poor Folk and The Double, and thus why The Brothers Karamazov proves to be such a monumental success. The early grappling with certain ideas become catalysts for going deeper in his work later. Frank shows how Dostoevsky is never satisfied to skim the surface, but always digs deeper. Even in his first novel, he defines his approach as “fantastic realism” where he exaggerates character and their actions. Frank writes, “They were, in his view, carrying out ideas and tendencies ordinarily existing in Russian society, as it were, in a less concentrated form.” As Wallace mentions, the critics misunderstand Dostoevsky’s aesthetic here. To Dostoevsky, these critics “swim in shallow waters.” They are unable to delve as deeply as he is going.

His work never caricatures people as good guys and bad guys. Within the prison walls, Dostoevsky developed an ability to empathize with perpetrators and victims. In his semi-autobiographical novel The House of the Dead, Dostoevsky experiments with the complexity of the human heart. Of the officers, he observes, “Tyranny is a habit capable of being developed, and at last becomes a disease.” Whereas the murderers serving sentences, Dostoevsky began to understand that, “in many instances, the murderer had been provoked beyond endurance by ill treatment.” The life-like, unfinished human beings that he depicts will lead to the forceful exclamation in the hagiography of Father Zosima, “We are all responsible for all!”

Because of his years in prison, Dostoevsky learned to see past realist or surface-level explanations for Russia’s problems. Frank writes, “Dostoevsky had become convinced that the real social-political problem in Russia was primarily a moral one.” More than moral even, Dostoevsky would say that one could not be good without a belief in the immortal God. Despite the trend in contemporary Russia to consider Christianity the faith of the peasants or to believe along with the intellectual elite in a solely human Christ, Dostoevsky “is one of the few modern novelists who honestly tried to present absolute Christian values as guides to life. And he does so without evasiveness or compromise, fully aware of all their absurdity and foolishness when seen form the point of view of rational self-interest and common sense.” The spiritual depth of Dostoevsky’s fiction has fascinated readers for more than a century: his questions on theodicy, on free will, on the church, on demons. In Frank’s explicit opinion, the spiritual intensity grants Dostoevsky’s work “force and impact” that even Tolstoy’s great masterpiece War and Peace cannot challenge.

While the lecture format of this collection does not allow Frank to expand or defend all of his claims (as he has done so thoroughly in his biography), one feels his authority on these texts. Miller asks in her Foreword a rhetorical question, “Who but Frank is entitled to make such a simple, even reductive, explanation of a complex process…..” Yet, his thirty years of study Dostoevsky means Frank has the right to make so many such assertions, especially given the parameters of his way of reading. As he lays out for us in his lecture on Notes from Underground, we must overcome the temptation to use “the work for our own purposes, in terms of our own contemporary cultural concerns,” which will prevent our understanding of the work. By choosing not to subscribe to cultural relevancy or to create his own particularized version of the author, Frank has crafted lectures that are themselves timeless. From them, we not only learn about Dostoevsky, but also, we are taught how to read well, think well, and, as for all grand endeavors, to live with eschatological apprehension.